The MScSM Program is proud to offer the Sustainability Leaders' Series, an annual lecture series on topics in sustainability.  Hear from world-leaders in sustainability offering insight into the complex management of economic, environmental and social interactions in business, science and beyond.

Toufah Jallow: The Woman Who Inspired an African #MeToo Movement

"What will it take to sustain the spirit of #MeToo in a world that recognize women's rights movements as a necessary catalyst for democratization?" - Toufah Jallow

Click here to read the article in The Medium 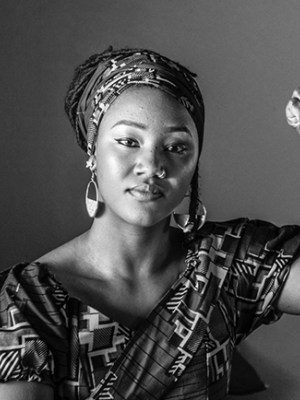 "It takes extraordinary courage and vision to induce social change in a single lifetime, and Jallow has done just that." — The New York Times

Toufah Jallow was just nineteen years old, looking forward to a university education, when she entered a presidential competition in 2015 created to support the country’s young women. She won, and caught the attention of Gambia’s dictator, Yahya Jammeh, who, after presenting himself with fatherly generosity, asked for her hand in marriage. When Toufah declined, he drugged and raped her.

Justifiably terrified, she kept what had happened to her a secret, even from her parents, and fled to Senegal, eventually settling in Canada. In 2019, after Jammeh was deposed, Toufah returned home to testify against him, making a stand for herself and for women on the African continent and everywhere. She continues to advocate for survivors of sexual violence today. Her book, Toufah: The Woman Who Inspired an African #MeToo Movement, is published by Penguin in Canada and Steerforth Press in the United States. 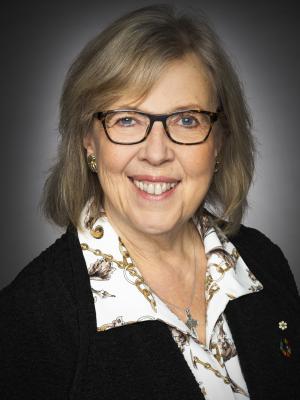 In 2005, Elizabeth May was made an Officer of the Order of Canada in recognition of her decades of leadership in the Canadian environmental movement. She graduated from Dalhousie Law School and was admitted to the Bar in both Nova Scotia and Ontario. She practiced law in Ottawa with the Public Interest Advocacy Centre prior to becoming Senior Policy Advisor to the federal minister of the Environment (1986-1988). For seventeen years Elizabeth served as Executive Director of the Sierra Club of Canada (1989-2006).

A proud mother and grandmother, she lives in Sidney, British Columbia, with her husband John Kidder. Elizabeth is the author of eight books, including her most recent book, Who We Are: Reflections on my life and on Canada.

Leroy Little Bear is a Blackfoot researcher, professor emeritus at the University of Lethbridge, founding member of Canada's first Native American Studies Department and recognized leader and advocate for First Nations education, rights, self-governance, language and culture. He has received numerous awards and recognition for his work, including the Officer Order of Canada, and the Alberta Order of Excellence.

Little Bear was born and raised on the Kainai First Nation, one of the member Nations of Blackfoot Confederacy which is a historic collective name for linguistically related groups that make up the Blackfoot or Blackfeet people. Little Bear challenges western academic cultural metaphysics and draws parallels between Blackfoot cultural metaphysics and quantum physics. He discusses contrasts between the concepts of western science and Blackfoot (Indigenous) science, and similarities between various concepts of quantum physics and Indigenous science; such as the similarities between energy waves and spirit and spirituality, the living nature of electrons and the concept of everything being animate in Indigenous science, and the double-slit experiment and relationships. He explains sustainability in the terms of the concept of renewal and the existence of human life in very narrow ideal conditions.

Bruno Dyck is an organizational theorist at the Asper School of Business, where he holds the Norman Frohlich Professorship in Business Sustainability. His research looks at sustainability, international development, organizational learning, and how values affect organizational behaviour and practice (more information at https://brunodyck.weebly.com). He has won international awards for his teaching and writing in the area of sustainable management.

This presentation will provide examples, and describe theory and best practices, of business who place people and planet ahead of profit. The presentation is based on Dyck’s research in the Social and Ecological Thought (SET) approach to business. SET businesses seek to optimize social and ecological well-being, while ensuring they remain financially viable (i.e., the SET approaches relaxes the need to maximize profits). He will describe implications of a SET approach for ethics and for different business functions (e.g., strategy, accounting, marketing, finance). He will compare and contrast the SET approach to the profit-first Triple Bottom Line (TBL) and Financial Bottom Line (FBL) approaches to business.

The Honourable Elizabeth Dowdeswell was invested as Ontario’s 29th Lieutenant Governor on September 23, 2014. Her eclectic public service career has spanned provincial, federal, and international borders, and has transcended disciplinary and sectoral lines.

Ms. Dowdeswell began her professional career as a teacher and university lecturer. After serving as the Deputy Minister of Culture and Youth for the Government of Saskatchewan, she held increasingly senior positions in the Canadian public service, most notably as head of the Atmospheric Environment Service. Throughout this period, she managed several public inquiries and royal commissions.

Her international negotiating experiences prefaced her election in 1992 as Executive Director of the United Nations Environment Programme and Under-Secretary-General of the United Nations, headquartered in Nairobi, Kenya. Upon returning to Canada in 1998, she established an international consulting practice and became the founding President and CEO of the Nuclear Waste Management Organization. Immediately prior to her appointment as Lieutenant Governor, Ms. Dowdeswell was the President and CEO of the Council of Canadian Academies. She has also served on numerous boards of corporate and non-profit organizations.

Ms. Dowdeswell was born in Northern Ireland and immigrated to rural Saskatchewan with her parents in 1947. She earned a Bachelor of Science in home economics and teaching certificate from the University of Saskatchewan (1966) and a Master of Science in behavioural sciences from Utah State University (1972). An Officer of the Order of Canada, Ms. Dowdeswell holds 11 honorary degrees.

Read the writeup by The UTM Medium here

The modernist bundle of beliefs and norms, which has powered Western societies for centuries, has begun to misfire badly in both the human and natural domains. “Sustainability” is not the answer. It lacks a proper and realistic vision. Instead, flourishing is the natural existential end for humans and the Planet. To move toward flourishing, the underlying structure of modernity must be re-designed to better reflect the highly interconnected, complex “real” real world. Recent findings from neuroscience suggest that the departure from reality may be due to an imbalance between the two brain hemispheres: the context-rich, holistic, alive world of the right vs. the abstracted, fragmented, inert world of the left. The dominance of the left, seen in the virtual hegemony of abstract, efficiency-seeking, technology and technocratic processes as the answer to all problems, has inhibited humans (and other lifeforms) from realizing their full potential, that is to flourish. To restore the right balance, leaders and designers need to acknowledge and embody right-brain perceptions of the world in their work, namely, 1) the complexity of social and large-scale technological systems and 2) the inherent relationship-based, caring behavior of humans. Pragmatic epistemological, educational, design, and management methods are necessary to capture the fundamentally unpredictable nature of the highly interconnected, non-linear, real (not abstract) world, and to reduce the appearance and severity of unintended consequences, like climate change or inequality.

Dr. John R. Ehrenfeld returned to his alma mater, MIT, in 1985 after a long career in the environmental field, and retired in 2000 as the Director of the MIT Program on Technology, Business, and Environment. Following that, he served until 2009 as Executive Director of the International Society for Industrial Ecology, guiding its development from its founding in 2000. He is the author of Sustainability by Design: A Subversive Strategy for Transforming our Consumer Culture, and Flourish: A Frank Conversion about Sustainability (with his former graduate student, Andrew Hoffman). In October 1999, the World Resources Institute honored him with their first lifetime achievement award for his academic accomplishments in the field of business and environment. He received the Founders’ Award for Distinguished Service from the Academy of Management’s Organization and Natural Environment Division in August 2000. He spent part of the 1998-1999 academic year at the Technical University of Lisbon as a Fulbright Distinguished Scholar and was Visiting Professor at the Technical University of Delft during the 2000-1 academic year. He is an editor of the Journal of Industrial Ecology. He holds a B. S. and Sc. D. in Chemical Engineering from MIT, and is author or co-author of over 200 papers, books, reports, and other publications.

Read the write up by IMI staff here

Entrepreneur, leader and philanthropist Bruce Poon Tip is the founder of adventure travel company and social enterprise G Adventures. Following a transformational backpacking trip to Asia, Bruce had an idea to change the face of travel. At the age of twenty-two, on two maxed-out credit cards, he started G Adventures, a small-group adventure company that would bridge the divide between backpacking and mainstream travel and give travellers the opportunity to foster meaningful connections with local communities in the countries they visited. Twenty-six years later, G Adventures is the world’s largest small-group adventure travel company, with 23 offices worldwide offering more than 650 tours on all seven continents and serving 150,000 travellers a year.

With a vision that travel could become a force for social good and significant wealth distribution, Bruce founded the nonprofit foundation Planeterra in 2003, which harnesses the power of the tourism industry to direct travel dollars into vulnerable and underserved communities around the world. His work with organizations such as the Inter-American Development Bank (IDB), the Multilateral Investment Fund (MIF), like-minded companies and indigenous people has supported more than 40 unique community development and relief projects around the world, with another 50 in development.

Passionate about travel’s power to change the world for the better, Bruce has become a global leader on social entrepreneurship, leadership, immersive travel, and innovation.

He has addressed the United Nations and the World Bank, spoken at the headquarters of Apple and Google, and delivered keynote speeches at TED events and entrepreneurship conferences around the world.

In 2012, Bruce was inducted into the Social Venture Network Hall of Fame, joining celebrated entrepreneurs such as Richard Branson (Virgin Airlines), Anita Roddick (The Body Shop), and Ben Cohen and Jerry Greenfield (Ben and Jerry’s Ice Cream). He was also awarded a Queen Elizabeth II’s Diamond Jubilee Medal, recognizing significant contributions to society, and was named Entrepreneur of the Year in 2006 and 2002.

Bruce’s first book, Looptail: How One Company Changed the World by Reinventing Business, a New York Times bestseller, was the first business book to be endorsed by His Holiness the Dalai Lama, who penned the book’s foreword. In 2015 Bruce released his second book, Do Big Small Things, a gorgeously designed journal about life and travel that takes readers on a journey and invites them to share their own inspiration and creativity.

Built on the foundation of a strong company culture that celebrates happiness and freedom and rewards disruptive innovation through risk taking and fun, G Adventures has been named one of the 50 Best Managed Companies for over 10 years and is repeatedly recognized as a “best place to work” in Canada, the US, the UK and Australia.

Read the review article in The Medium here

David Miller is President and CEO of World Wildlife Fund – Canada, Canada’s foremost conservation organization. He was Mayor of Toronto from 2003 to 2010 and Chair of the influential C40 Cities Climate Leadership Group from 2008 – 2010.